This summer I spent a month in Berlin having an adventure, brushing up on my Deutsch and putting together a travel guide, which we’ve titled üBerlin, with a group of others on a gap project.

I’ve often followed the shows at Berlin Fashion Week and with the city’s creative reputation I was really looking forward to discovering some fashionable things to do there. Here are some of my favourites:

This store is widely regarded as the best independent designer boutique in Berlin and I was pleased to find it lives up to the hype. It’s inviting from the moment you walk past the long stretch of glass windows in the beautiful Gendarmenmarkt with mannequins draped in the latest fashion from Alexander McQueen, Isabel Marant, Saint Laurent Paris and Victoria Beckham. It’s even more inviting when you’re greeted by the warm and unpretentious staff. The edit is modern and fashion-forward which matches the interior perfectly with its chic white walls and fixtures, pops of neon artwork by Olivia Steele and a long, winding table of fashion tomes. There’s also a small beauty section and the cosy upstairs platform is Louboutin heaven. Their menswear store is a short walk away on Markgrafenstrasse and they have a second womenswear store on Wielandstrasse in Charlottenburg. Berlin is not particularly well known for luxury shopping so it may not seem a hard market to stand out in but the ultra-contemporary vibe and intimate, homely feel of The Corner have earned it an international reputation with some even saying it rivals Parisian queen bee of boutiques, Collette.

The Helmut Newton Foundation has done a wonderful job of portraying a great selection of the famed photographer’s work in his hometown. His photographs span seven decades and a selection are displayed in the temporary exhibitions of which I saw ‘World Without Men’, which features some of his most iconic fashion works for top international magazines, and ‘Archives De Nuit’, a selection of his black and white photography covering subjects outside of fashion. I was really struck by how his work still has so much impact today. I think that’s a true testament to a photographer with real vision. What is really special about this museum though is the permanent collection of possessions which belonged to Newton which give a real insight into who he was and how he worked. I found the most moving to be the video of him working on a shoot (a true genius at work) and the collection of letters sent to his wife after his sudden death in a car crash in LA in 2004. It’s a little pricey at €10 for a fairly small museum but it’s a real pilgrimage for fashion lovers and worth the money if you’re a fan of Newton’s mesmerising and explicit work. 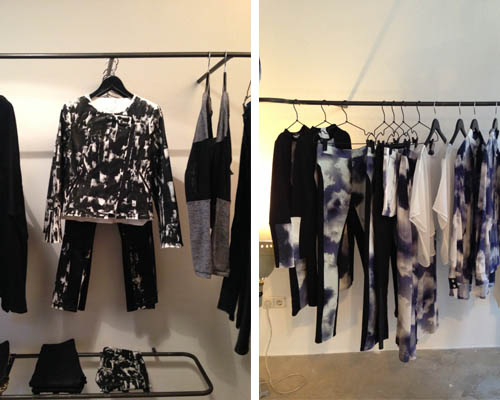 My favourite area of Berlin is the side streets between Rosenthaler Platz and Weinmeisterstrasse in Mitte. It’s full of upmarket independent shops and cafes but there’s also a very creative vibe with a number of fashion, media and art businesses in the office space above them and street art on every turn. One of the newest stores on Gormannstrasse, Vektor, really stood out for me. This is the first standalone store for the Berlin-born fashion label selling womenswear and menswear with a grunge vibe mixed with bold digital prints. I was particularly enchanted with the cloud print which appeared on loose, oversized shirts, tailored shorts, figure hugging dresses and leggings. They’re a name to watch out for.

The same grid of streets is also a great place for vintage shopping. You can find my pick of the best in my feature in the üBerlin travel guide which also covers many of the best tourist attractions, places to stay, places to eat, places to go out and lots more shops in Berlin. You can download it on Lulu here.